Flooding, record flow, broken damns and swamped levees. I’m following the news; don’t think I underestimate the power of the river. I am not ignoring the warning signs. I’m taking them as that: warning signs. Reminders to be cautious, stay sharp. Don’t think either that just because I paddled the Missouri River, some two hundred miles longer than the Mississippi, that I see this river as in the bag.

I recognize the current closures to the river and will do what I have to comply with the Corps of Engineers’ decisions. Worst case I end up doing a lot of portaging. I will find places to sleep. No matter how flooded the river is, she has to stop somewhere.

I feel for the people whose homes have been flooded. I hope I will not be insulting them by traveling down the river in this state, a sentiment already expressed by a thru-paddler currently making the journey.

I have a very healthy respect for the river, especially at this time of year.

Here in south Louisiana, I fear her.

But I haven’t ever gotten to meet her, really. We touched briefly in St. Louis when I arrived at the confluence, but other than watching wide-eyed from bridges, mainly the bridge into Baton Rouge, the Mississippi is terrifying and mystifying to me.

I don’t own an airplane, but I can fly one and I teach other people how. One day in April, I took one of the work airplanes up and headed straight for the river. As the crow flies. I wanted to see her on a grand, but personal scale. I intercepted the river south of Baton Rouge and followed her downstream. I couldn’t stop staring. Even from 1,500 feet, I could see the current boiling. She was flooded and swollen. The water rolled and made waves with whitecaps. Colossal container ships churned a roiling wake miles long.  This wasn’t making me feel less apprehensive, but at least I was more informed. I unfocused my eyes to try and see the entire river in my field of vision, from where it was beneath me to where it disappeared in the horizon. I saw her winding and curving in the distance. I was probably looking at two days’ journey from up here.

I’ve been flying airplanes for eight years and still haven’t gotten tired of looking at shit from the air.

I flew by New Orleans, cupped in a bend of the river like a breast in a push-up bra. 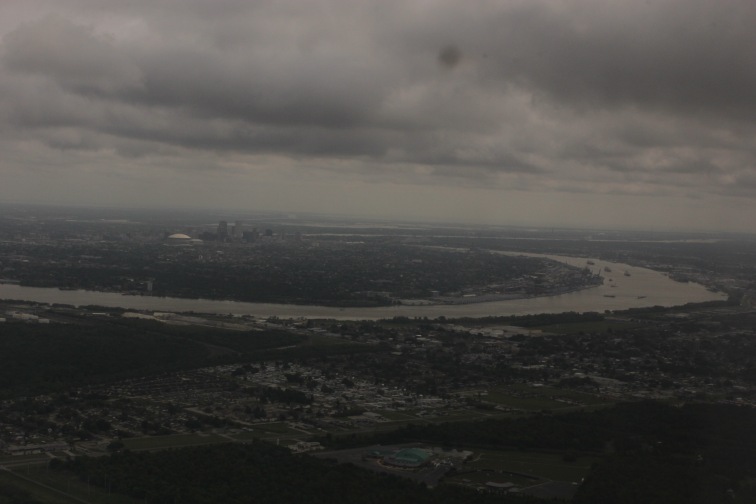 “That’s why they call it Crescent City.” said my dad.

“Ohhh.” Mom and I said in unison, with the same inflection. They had been in town so I had taken them up with me. Mom sat in the back, clicking away at her camera. New Orleans air traffic control kindly let us through on our peculiar mission.

We went all the way to the Bird’s Foot Delta, where the river branches off into three channels to the Gulf. 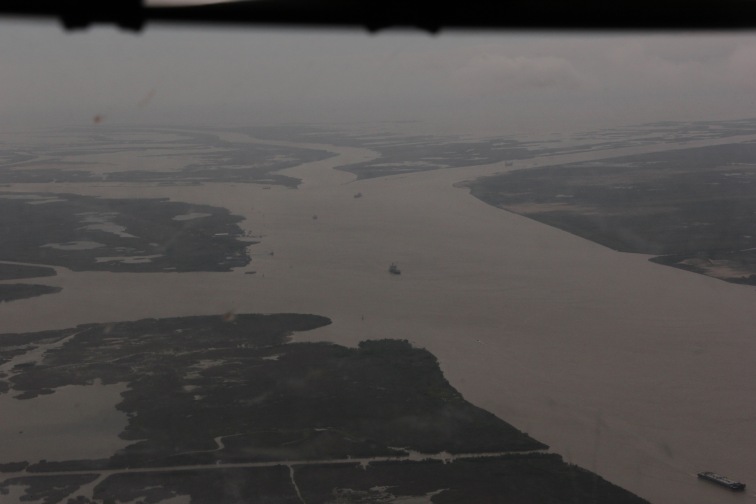 I steered the plane to follow Southwest Pass, the largest toe in the foot and what is formally considered the last stretch of the Mississippi River. Here the river’s current is strung along like a starving horse far into the Gulf, until finally people deem her finished with the inexhaustible job of carrying our commerce and release her into dead, open water.

Of course, the river doesn’t want to go this way. It’s common knowledge here in South Louisiana that the river wants to come down the Atchafalaya River, which branches off from the Mississippi at mile 304 in Fort Adams, Mississippi. It’s just north of the right angle the state makes as it juts out into the boot.

Roughly 30% of the water that comes down the Mississippi is sacrificed to the Atchafalaya River. Considering the Mississippi is the largest river in north America by volume (the Missouri River being the largest in length), this is a massive amount of water. My Pápá, my mom’s dad and a Cajun man through and through, told me that his grandfather said the Atchafalaya River was just a creek when he was a kid. Now, it’s a big river, notorious for its fast current. Slowly, the river is having her way. One day we won’t be able to stop her. It’s not a matter of if but when.

It’s not a matter either of freeing the river and inconveniencing commerce up and down the most-used river in North America; it’s about saving the wetlands and Louisiana.

Every couple of thousand years, river deltas naturally change course. As rivers reach the ocean, they slow down. This causes suspended sediment to fall out of the water. Over time, this sediment builds up and new land is created. We all know rivers want to take the easiest route to the sea, so once the river deposits enough sediment that it builds up land, it diverts itself around to a new area that is lower in elevation. The process begins anew. This is how the wetlands receive new nutrients and how barrier islands form. The Mississippi river deltaic cycle began around 7,000 years ago and the last time the delta changed course was around 2,000-500 years ago. She’s ready to switch again; the wetlands are starving.

When I get to the Atchafalaya River, I don’t know if I will choose to go right, down that river, or stay left on the Mississippi. I’ll decide when I get there. Though, with all this flooding, I can’t help but wonder if by the time I get there, the river might have decided for me. After all, it’s not if but when.

4 thoughts on “The State of the River”